This past December, the Outdoor Activities team at the Lodge was discussing different, special, adventures to offer guests this winter season. Night time snowshoe hikes were one of the ideas. Ultimately, we decided to experiment with offering monthly guided snowshoe hikes under the light of the full moon. This turned out to be a great idea, especially with our drive to promote activities under the Keweenaw night sky. 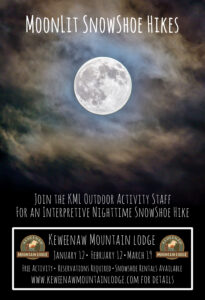 Beginning a new program of night activities came with its own set of challenges and uncertainties, though. 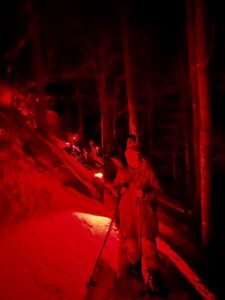 Setting the plan for the guided snowshoe hikes in motion, we ordered flashlights that emit red light for use instead of standard flashlights and headlamps, made sure that at least two staff members were always leading the excursions to ensure that no one went too fast and that no one would get left behind, and set the dates for the hikes based on the full moon dates for January, February and March.

The March 19th guided snowshoe hike had ten participants (nine adults and one child).  Of the three hikes we guided this winter, this hike turned out to be the most challenging. We needed to set the time later in the evening due to the time change which occurred the week previous, meaning that the hike began an hour later than the others. Even so, the excursion began more as a twilight hike, instead of moonlit. 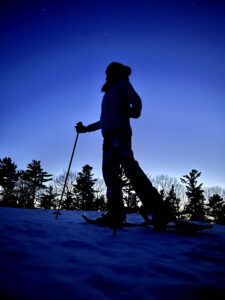 Also, on that particular evening, the moon wasn’t scheduled to rise until very near the time we would be finishing. This resulted in visibility being far less than the other hikes, for which the moonlight reflecting off the snow had provided enough light that we never needed the red flashlights. On this hike red-lights were definitely needed in wooded, pitch black, sections of the trail. Plus, during the week before the hike, the region experienced unseasonably warm temperatures, which caused portions of the trail to get buried by small avalanches from cliff lines overhead, while other sections of the trail would collapse under foot, due to snow melt undercutting the trail.

With all of the obstacles encountered on this particular hike, though, everyone approached it with an adventurous, helpful spirit and every participant expressed that they had a great time, learned new things, and were pleased they had tried something they had never done before. 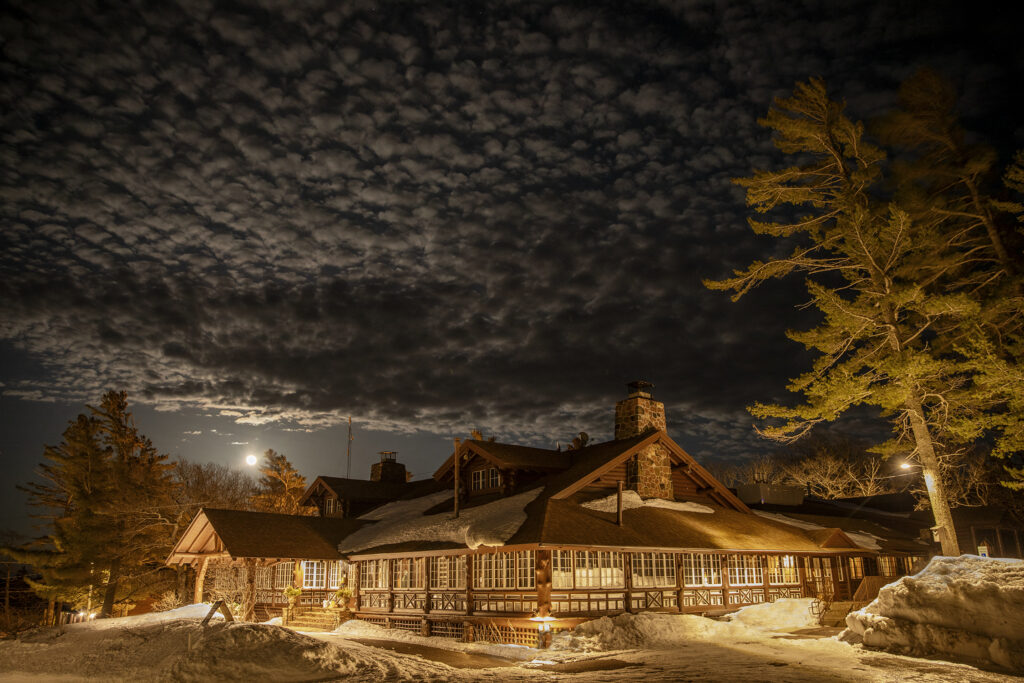 As we finished the hike, the moon was rising behind the Lodge, providing a beautiful backdrop and grand finale. The thing we learned on this particular night is that the guided snowshoe hikes at the Keweenaw Mountain Lodge, no matter if they are dreamlike excursions under the moon and stars or vigorous and filled with obstacles, continue to be a truly fun, joyous, and adventuresome experience.

Since I was a child, nature, wildlife, and the outdoors have always been my deepest fascination – the intrinsic force which drives me. Those interests led me through, both, my career (in wildlife ecology/management and science education) and my preferred forms of recreation (hiking, backpacking, canoeing and kayaking, photography, hunting and fishing, and birding). Although, I was born and raised in the UP, these pursuits also provided me the opportunity to live overseas (in Europe and Asia) for 15 years, which greatly expanded my experience with the outdoors and outdoor recreation in different cultures. So, if you’re interested in anything related to the outdoors, stop by the Lodge (or catch me anywhere you may see me on the grounds) to chat about or get set up for your next outdoor adventure.

Night sky photography and stargazing are wonderful pastimes for visitors and residents alike in the Keweenaw. At the Lodge we work to provide opportunities for individuals to enjoy the stars and take photos that allow them to remember their experiences.

The 2022 Keweenaw Mountain Lodge Copper Harbor Trails Fest is this weekend. We want to welcome everyone to Copper Harbor and wish them a fun, joyous and adventuresome experience.

Trails Fest is celebrating its 29th year and the Lodge is proud to be the title sponsor for the second year in a row. This all-ages event brings people from around the country to celebrate the Copper Harbor Trail system.

New to the schedule are two different types of KML Learning Experiences: guided interpretive hikes with naturalist @theupwell and a mountain bike skills clinic with @revolve_mtb

To learn more about the Keweenaw Mountain Lodge’s sponsorship of the event:

Turkish Chicken marinated in yogurt, lime and turmeric served on a pita with house made hummus and harissa.

Since June 1st the Keweenaw Mountain Lodge has been serving private dinners based on our rustic worldly food concept.

This culinary experience allows guests to have an intimate meal in our historic dining room and have a chance to interact directly with Chef Wi.

Our menu changes weekly. Please see our website to view our current menu:

“Look deep into nature, and then you will understand everything better.” ~ Albert Einstein

A mother crane and it’s chick make their way across Hole 9 on the golf course. A young crane leaves the nest within a day after hatching. Both parents feed young at first, but young gradually learn to feed themselves. Age of first flight is about 65-75 days. Young remain with parents for 9-10 months, accompanying them in migration.

The Keweenaw Mountain Lodge would like to welcome the Singletrack Flyers for their annual end-of-season picnic. Congratulations to all the kids and their parents on a successful summer learning mountain bike fundamentals!

Water 💦 A resource that we value and monitor our usage of.

When we water the golf course, we continue to be aware of our usage and are constantly working to be more efficient with how we use this precious resource. It is part of our movement to become an Audubon Society sanctuary golf course.

Mother Nature has been testing use this summer on the golf course. We have had only 2.6 inches of rain since opening the course on June 1st for the 2022 golf season. With this little amount of rain, the golf course maintenance crew has stepped up at the Lodge to do a wonderful job to keep the course in good shape while still managing our water usage.

Regarding our watering source when it doesn’t rain, we get water from two sources: an 88 foot well on property and Lake Superior (piped 1.5 miles up the hill to the Lodge from the big lake).